There is no universal agreement on the do’s and don’ts of hashtags on Instagram, and social media in general. Nonetheless having said that, after poring through various literature, blogs, and industry experts, I did manage to find a few practices that most seem to agree on.

Your posts should contain a hashtag pertaining to your geographic location. Unless the whole of what you are doing resides on the Internet, it’s recommended to use location-specific hashtags.

For example, if you are a health club located in Los Angeles, it would make perfect sense to use hashtags like #LAgym, #LAFitness, #LosAngeles or #SoCalFitness, or simply #SoCal.

If you were a nightclub or bar in NYC, you might choose #TheBigApple, #NewYorkCity, #NYC, #NYCNightLife, #NYCnightclub.

As a general rule, no more than 2 or 3 is needed for specifying your business location.

Don’t forget to include at least 1 and no more than 3 of these.

Don’t forget to include Specialty Hashtags

At least 1 ( and no more than 2 ) should be a specialty hashtag that is not too widely used (between 1,000 and 3,000 total search results) that pertains to your topic. For example,

These hashtags will make it possible for your post to be seen by a smaller, sometimes, a tighter-knit community of a still sizable audience, in which case you’re likelier to be seen here than you would against #love or #funny, for instance. Less competition, in other words.

For Actual Campaigns brand it with one unique hashtag

By unique, I mean a hashtag that returns 0 search results. In other words, no one else is using it. Using a distinct and unique hashtag allows you to track the progress of campaigns, and offers useful analytics information that isn’t available without one. You are also using this hashtag to brand the campaign. For example, if you are running a contest, you ask users to use that hashtag and mention you on Instagram – for example; when posting that item. You can also measure the performance of all posts that used a specific hashtag.

A few (no more than 2 or 3) of your hashtags should a popular one with more than a million search results.

Use at least 1 and not more than 3 hashtags that are trending but not at the top of the list. Examples would be:

Some of the toptrending hashtags include:

Before you decide to sprinkle a little #love into all your Instagram posts, here’a caveat. It is not necessarily a good strategy. While it is true that Instagram allows up to 30 hashtags per post, that doesn’t mean that it’s the best thing to use all 30 hashtags. Even further, if you use too many general or vague-sounding yet trending hashtags in your posts. If the hashtag keywords are irrelevant or unrelated to the topic of your post they may and eventually will get you flagged as a spammer. Yes, there is such thing as hashtag spam in Instagram. Recently they have been taking measures to reduce spam and they have been known to block users temporarily for excessive hashtagging among other things.

The more popular hashtags like #cute or #funny will allow you to show up on a search, but the competition is much steeper. Unless you are a multi-billion dollar company or public figure with an established following, what’s the likelihood you’re going to be on the top of the feed? You’re up against millions of users also using that hashtag. Don’t think that the more popular hashtags you use, you’re gonna get more results. Not necessarily.

On the other hand, that doesn’t mean you shouldn’t either.

If you post is a short comedy skit, it would make sense to use words like #comedy and #funny. You could go further into detail and also throw in #slapstick or #standup, and that begins to paint a clearer picture of what it is you’re seeing. Unless it adds a new layer of specificity to your content, don’t add more than 3 such broad hashtags though.

Here is PR Week on the question:

The this brings us to our next question:

What is the ideal amount of hashtags to use in a single post?

Latergramme had this to say:

posts with nine hashtags were found to perform best

Rival IQ had this to say:

Use multiple #hashtags, but under 10 is best!

This is what Hootsute had to say:

“Tagging your photos and videos with the most popular hashtags will probably gain you new followers, but they’ll likely be the wrong kind of followers—spammers or people only interested in being followed back. And using too many hashtags might dilute your message and make you seem desperate.” 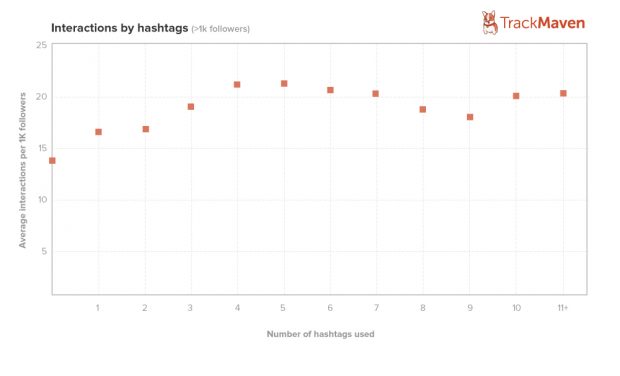